Most people look to retirement as a time of leisure and relaxation. Not so for Maggie Kuhn, who led a new venture called the Gray Panthers beginning at age 65. In 1970, after a forced retirement, Kuhn took up the standard to fight for the rights of the elderly. She worked to bring awareness to issues, such as age discrimination and public policy. 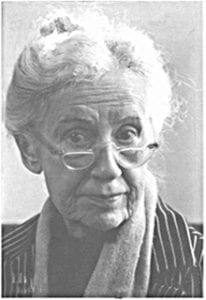 She also sought to bring people together in a multi-generational effort to make the world a better place.

The Gray Panthers immediately gained attention for their protests of the Vietnam War, an objective for which Kuhn had no trouble finding supporters of all ages. She led members of the Gray Panthers with confidence and charisma that grew the organization from its foundation to the nationwide powerhouse that it is today.

How did Kuhn get people to rally behind her and the causes she supported? What made this retiree embark on an exciting new adventure at an age when many people are content to rock on the front porch? Maggie Kuhn was an honest and charismatic leader.

Kuhn was able to encourage people to “Dare to stand before those you fear and speak your mind, even if your voice shakes.” Through her own confidence and candor, she gave others the inspiration to speak their mind and stand up for their beliefs. By encouraging those of every age to work together, she formed a diverse group of people who were able to see that there was much more that they had in common than anything that might set them apart.

Kuhn’s work has been called a “contemporary cultural revolution,” due to the way she was able to unite “young and old together.” With her leadership, the Gray Panthers attacked issues of elderly health care, retirement, and fraud. She strove to make retirement a time of life that could be active, enjoyable, and productive.

The Gray Panthers floundered without the leadership of Maggie Kuhn after her death in 1995. It took two years for the organization to develop a new strategy using leaders who would have to step into rather large shoes. They continue to emphasize their objective of unifying the generations for the greater benefit of society at large.

Because of the ideas and willingness of Maggie Kuhn over 40 years ago to take a stand, thousands of people, young and old, continue to work toward a better standard of living for the elderly.